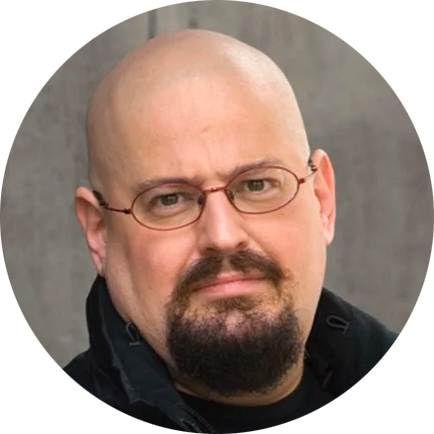 “Palimpsest” follows Pierce, a police officer working with the Stasis, a special institution dedicated to the preservation of humanity by its agents who are able to travel through time. Every time humanity dies, the Stasis reseeds Earth with a new generation of humans to develop a civilization. However, the Opposition, an organisation that seems to struggle against the Stasis, has been created over time, and it seems that Pierce is somehow tied to it.

The novella won the Hugo Award in 2010 and appears in the anthology “Wireless.”

Charles Stross is a science fiction writer who has been nominated for six Hugo awards and was the winner of the 2005, 2010, and 2014 Hugo awards for best novella. He has won numerous other awards and been translated into at least 12 other languages. His books include Accelerando, Glasshouse, the Laundry Files series, and the Halting State series.

Proceeds will be used to make donations to a cause. In the past, we have donated to local bookstores and PPE for Covid-19 healthcare workers. We're currently evaluating social justice organizations for our next set of donations.